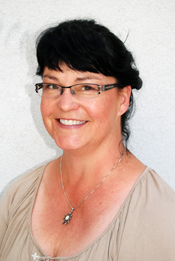 by Marie Tjernlund
I was so proud of myself. A month before Cagli, I started listening to Conversational Italian during my daily commute. While stuck in traffic, I practiced saying buon giorno and per favore with gusto. I was amazed at how easily “Io non capisco l’ Italiano” slide off my tongue. Armed with a small vocabulary, I felt invincible.

Soon after arriving in Cagli, I was sitting in the central piazza catching up in my journal. Suddenly, I heard a quiet voice. “Signorina?” Looking up, I realized an older gentlemen was speaking to me. He repeated his question, gesturing to the café behind me.

My brain frantically sought a phrase that I practiced. But something was wrong. My tongue tied itself up in a thousand knots. I mumbled horribly. “Io…uh…capice…uh…” No, no, no! What was happening? I was hopelessly lost and babbling incoherently.

With tender eyes and a warm smile, the man leaned in closer to me. I somehow managed to comprehend that he was trying to determine my language. Finally, my mind made a connection. “l’ Englese,” I said sheepishly.” The gentleman continued on with words I imagined were something to the effect that I shouldn’t worry. He would ask his question to someone else.

As he turned and walked away, I felt all my pride dissolve. I thought I was so prepared. Instead, I fumbled miserably in my first attempt to communicate. Then again, what a dear first encounter with a citizen of Cagli. His kindness reminded me to be patient with myself one conversation at a time.
Posted by giovanni at 10:59 AM